The Difference between Chemical and Metal Etching for Business Cards 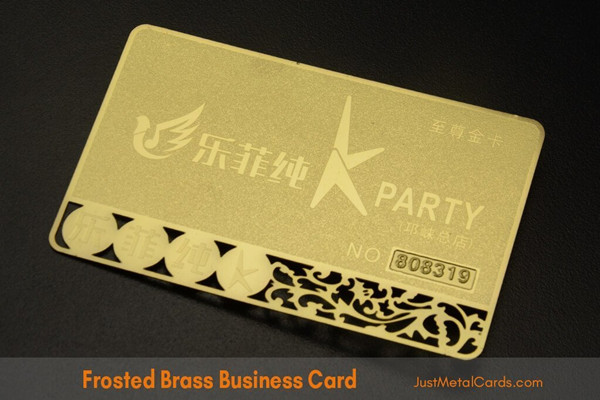 When it comes to metal business cards, one of the most prominent of subjects happens to be that of the information on it.

Currently, there are a few major ways in which the information can be represented, which includes among others, printing, cutting and etching.

Of these two, one of the most common is that of etching, wherein the information on the card is ‘etched’ or ‘engraved’ onto the metal surface.

There are currently two ways in which the same can be achieved; namely using chemicals and metal surfaces.

There are a few important differences between these two methods of creating etched business cards, the details of which are given in the points below:

In the case of etching using chemicals, an abrasive chemical is used to get the desired results. Typically, the cards are made with the help of acid-based solutions, where the desired markings, information and other details are essentially ‘burned’ or ‘reacted’ onto the metal surfaces.

When it comes to metal etching, the card’s metal surfaces are essentially ‘deformed’ with the help of devices, typically automated, but which may also be manual.

When it comes to durability, the ideal pick would be that of metal etching over chemical ones.

The reason for this is that the cards tend to get a greater depth of etching when done using metal, as opposed to chemicals.

Also to be noted is that the depth of the etching is something that can be chosen in the case of metal, as opposed to chemicals, which allows for the cards to be more durable.

In the case of the quality of the finish, the opposite of the above is true.

While the same is certainly possible with metal etched cards as well, the degree of ease tends to be greater with those made with the help of chemicals.

Another important characteristic that is worth pointing out is the changing of designs.

While it is very much possible to change the design in the case of metal etched cards, the same doesn’t hold true for chemical based ones.
The reason for this has to do with the way the final cards are prepared. When it comes to metal cards, the only real further processing that goes about after the etching is a coat of varnish or shine, if at all something is to be done.

But in the case of chemical etched cards, it is but the beginning of the entire process. Once the cards are chemically etched, there is often a ‘coating’ process involved, where the card is subjected to a process where another layer of metal is ‘coated’ with the help of processes like electrolysis.

What this means is that the modification of the cards will depend greatly on whether it was etched using metal or chemicals.

One of the greatest limitations of chemical etching is that of cards with designer elements in them, such as carvings, holes and so on.

The metal etching process also allows for the cards to be engraved with ‘see through’ holes, made out of patterns such as those of squares, circles, flowers, etc. Given that the metal etching process can remove metal from anywhere between 5-10% on one end and 100% on the other, depending on the need of the client, it allows for a greater degree of flexibility when it comes to the final design.

In the case of chemical etching however, this degree of design flexibility doesn’t exist, for one simple reason, which is that the chemicals are usually not strong enough to create the kind of depth and variation required for intricate design elements. Typically, chemicals remove about 10-20% of the metal surface, making them very unsuitable to create these intricate designs.

While it is possible to repeat the process multiple times to achieve the same result, it does become redundant beyond a certain point, which is why most people tend to go for metal etching in the case of complicated and ‘see through’ design elements.

The cost of the etching process can vary greatly, depending on the kind of process that is used. This doesn’t mean however, that metal etches are cheaper or those using chemical etches are expensive. This is because one of the things that have to be taken into account is the final design.

Chemical etching is ideal for doing complicated and accurate designs at a low cost, if they don’t require the use of holes and other ‘see through’ elements.

At the same time however, metal etching becomes cheaper if one is into these see through designs, where large amounts of material is required to be removed from the card’s surface.

While this is not much of an issue in general for the final product’s result, it does become an issue for those who are ecologically conscious.

The creation of cards using chemical etching processes, while being a great way to achieve an ideal finish, can lead to some environmental nightmares if the chemicals are not disposed off in the right manner. The chemicals, being harsh and often corrosive in nature (due to them being acid based), can end up polluting the environment without adequate disposal strategies in place.

The above is not much of a problem when it comes to metal etching. It is one of the most eco-friendly etching processes available, where the only real waste that is produced are bits and pieces of metal, and maybe a few blunt etching heads (of the machines used for etching), which can be disposed off in a fairly safe manner with ease.

To sum it all up, the above mentioned points are some of the most important differences around, when it comes to chemical and metal etching of business cards.

There are others as well that exist, but which are of less importance than those mentioned above.

Last but not the least, one should also note that there are other methods of preparing metal business cards as well such as sandblasting, laser engraving, etc, which are also widely used.