These 9 Mistakes Will Destroy Your Metal Business Cards 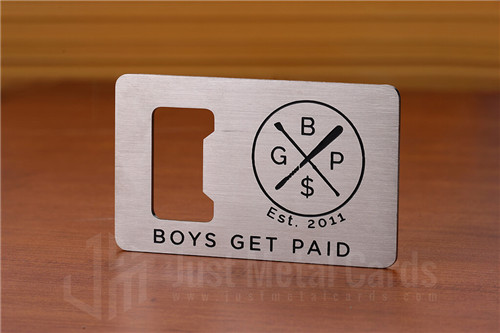 Metal business cards are some of the most unique things in the entrepreneurial world.

Rare, precious and elegant, they are a great way to make a first impression.

Of the many reasons for their preference, one of the most important is the fact that they are very resilient and long-lasting.

This however, is not really an absolute. On the contrary, metal business cards can be rather delicate, if you don’t handle them well.

In fact, there are plenty of ways in which you can damage metal cards, sometimes without knowing it.

Several mistakes can occur, which a negative effect on your metal business cards.

Nine of them are listed out in the points below.

There is no faster way to ruin a card than to store in a moist environment.

Given that metals corrode easily when exposed to moisture, it is a good idea to store them in dry conditions at all times.

Also to add here is that ‘moisture’ here refers to both humidity as well as liquid water. Both of them will have an adverse effect on the cards, with the former causing the deterioration slower in comparison to the latter.

Letting them lie around, is another way in which the cards can get damaged.

Given that most surfaces are usually covered in dust and fine grams of sand or other such particles, the cards will tend to get scratched or eroded overtime.

In addition to this, their exposure can also expose them to other hazards as well, such as liquids, sunlight, furniture, etc, all of which can have a very negative impact on them.

It is understandable that you wish to clean the cards and maintain them well.

As much as this is important, it should be known that the same chemicals used for removing the dirt, can have other effects on the card as well.

For example, many chemicals are known to be excellent for removing dirt, dust and grease. At the same time however, they also have a similar effect on things like paint. What this means is that in an effort to remove the layers of dust and dirt, you might just end up removing the paint used on the cards as well.

It is therefore a good idea to first check the nature of the chemical being used, before you start using them on your metal card.

Abrasive materials are those materials used for rubbing or grinding a surface in order to achieve a polished finish. A good example of this is sandpaper.

The good thing about these materials is that they work, very effectively. At the same time however, they can have negative consequences when not used properly.

Done right, they will help to remove the thin layer of dirt and oxides accumulated overtime. If you are not careful however, you might just end up ruining the prints, etchings and other aspects of the card as well.

It can be tempting to ‘restore’ the cards by painting.

This is because, overtime, it is inevitable that some of the paints used on them will flake off, leaving behind blank and empty patches.

Many people remedy this by painting on them, and it tends to work many times. If not done properly however, it can completely ruin the card, especially in the case of permanent paints which don’t easily come off with either water or solvents.

Although metal cards are fairly sturdy, they can be easily damaged, when not stored properly.

In this regard, as hard as it might be to believe, they are delicate in nature and need to be treated as such.

A good example is that of the cards bending, if stored under a lot of weight. This is quite common, when they are stashed away along with other objects, often with the overconfidence that they are strong and can withstand just about anything.

Keep in mind that while they are fairly sturdy, they do have their limitations, and when that limit is reached, that they too will give in.

Heat has a very negative effect on metal surfaces.

Excess exposure to heat can cause the material to warp, twist and in addition to this, also cause the paints used to darken and erode, in particular at higher temperatures.

Regardless of the exact impact taking place, the end result will be a card that is damaged beyond use.

The sources of heat can be both natural, such as sunlight, and artificial such as fires.

Impact is another issue that is often ignored in the case of metal cards.

The exact source of impact can be many, which range from the simple slam of a drawer while storing it away, to the force of the inside of a washing machine if it were accidentally left inside.

This is similar to the case of extreme heat.

While extreme heat can cause damage to the card itself, and erode away the paints, cold temperatures can have a similar effect.

This particularly applies to metal cards that have been painted upon, rather than cut or etched. The reason it causes damage is due to the fact that the cold temperatures tend to cause uneven contractions between the metal and the pigments, which in turn results in the paint ‘coming off’ the cards.

The end result is that the paints used on the cards eventually flake of or peel away, leaving behind a damaged card.

To sum up, metal cards can be quite easily damaged, when you think about it.

Although they are sturdy given the material they are made from, they do have their limitations.

Done right, the steps mentioned above and others like it should help the cards to last for a very long time.