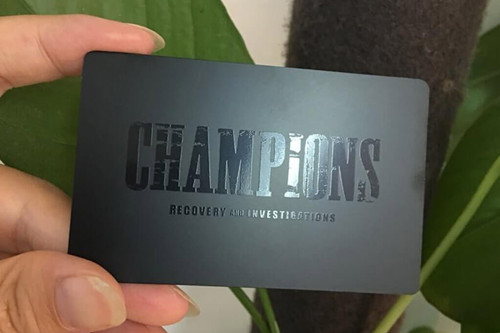 In the world of business, it is typical for one to distribute business or visiting cards.

Containing information such as the name of the business, name of the proprietor, contact information, company logo and so on, they have become typical of modern business practices.

As for the choice of material, there are indeed several of them around.

The typical company that offers business cards often give the choice between those made using cardboard and plastic. But then there is other material of choice as well, one of the most important being metal.

Typically made using stainless steel or other alloys, metal business cards are rather popular among many in business circles, especially when it comes to large companies and individuals.

There are several advantages to choosing metal business cards.

Some of the most important ones are given below:

One of the most important advantages of business cards made using metal, is that they are unique.

Not many people use them, making it an ideal way to stand out from the competition. In a world where everyone typically use cards made using cardboard or plastic, metal cards are a style and fashion statement like no other.

This allows for one to stand out like no other, in both everyday conversations as well as those of business meetings.

Metal cards tend to last longer than most other cards, especially when they are made from the right material.

Unless they are made from pure iron which subjects them to corrosion, you can expect them to last for a very long time, which can extend into several years.

Also, the designs and wordings used on the same are pretty much going to last just as long, if they have been done in a suitable manner as well.

This is in sharp contrast to other cards, which tend to wear out and get damaged with the passage of time.

It is not only a great way to remain in the lives of former clients and prospects, but also to maintain a steady stream of clients, for a very long time. About the only concern here is that the business address, contact, and especially the name, should remain the same, in order for the durability to allow one to reap the rewards.

This has to do more with the actual client and overall marketing tactics more than anything else.

To position one is to create a sense of value that helps a business to stand out, in comparison to others.

There are several ways in which businesses can seek out a way to position themselves in a way that suits their profit goals. One of the best ways however, is through a simple business card made out of metal.

The very use of such a card in a business conversation or something similar, helps to create the kind of market positioning that not only attracts profits and returning buyers, but also something else as well, which is the general reputation in the overall marketplace.

This is something related to the previous point, but at the same times something very unique unto itself.

The usage of metal cards, given their generally higher cost, allows for them to have a better brand positioning in comparison to the competitors.

The rationale and logic behind it goes along the lines that only a rich and prosperous company can actually afford to engage in ‘luxuries’ such as metal cards, and is therefore very likely to be a very profitable venture.

This is something that has to do with treating your best or frequent customers better than one time buyers.

It is a known fact in any business that the client mix is always one where there are repeat buyers on one end and one time buyers on the other.

The duality concept allows for one to issue metal cards to repeat buyers and conventional ones in the case of one time purchases, thereby allowing for a greater degree of client satisfaction and loyalty.

The basic idea behind this is that customers like to feel special, even if it is something as simple and rudimentary as a basic business card. Every little piece adds up in the end, and that certainly holds true for the use of business cards as well.

It should also be added here that the repeat buyers need to be aware that the metal cards being given to them is ‘exclusive’ in nature, and not something widespread. This is important to ensure that the idea of giving metal cards to special customers has the intended effect on them, which is to make them feel special in comparison to others.

This is one point that is related to several of the points that have been pointed out above.

The fact that metal business cards are rather expensive and rare in comparison to conventional cards has the immediate effect of both awe and curiosity.

This in turn, when allowed to take hold of the intended client or prospect, will allow for the individual to better engage with the brand, through a greater interest in the business and whatever it may have to offer.

Ultimately, it will have the effect of an increase in the overall profits and business growth.

This is another great advantage when it comes to the use of metal business cards.

Metal cards, by their very nature, are a curiosity unto themselves, similar to handicrafts, trinkets and souvenirs. As a result, it is common for people to show off their new acquisition to other people, and thereby allow for the company to be known by people far and wide.

In this regard, it helps give rise to a form of ‘word of mouth’ marketing like no other.

In addition to the above, there are a few other advantages as well with regard to the choosing metal business cards over others. These are however, some of the less important ones in comparison to those that have been listed out.

All of these advantages, and others like it, make metal business cards a great pick for those who may be seeking an ideal choice for their next set of business or visiting cards. At the same time, it is equally important to know How to Choose the Right Metal Business Card.