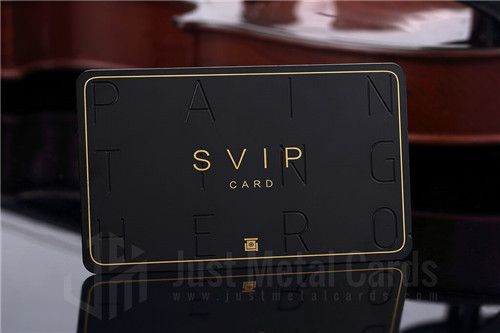 Metal business cards have been around for quite some time.

Often characterized as a ‘luxurious’ accessory for businessmen, they are widely in use across the business world.

Despite this, it can be said that they are in fact quite rare in comparison to other business cards.

Given their pricing, lack of awareness and to a certain extent, scarcity, they can be hard to come across.

Regardless, they are preferred by many for a host of different reasons. Some of them include aesthetics, longevity, uniqueness, a symbolism of success, sturdiness and so on. These advantages and others like them are a key reason why many prefer them, although others indeed do exist.

While all of this is true, there are a few limitations for their use.

If one were to observe the degree to which they are used, it becomes clear that they aren’t as widespread as one would expect.

This is because they are not always the most ideal choice for many of these businesses. From issues such as viability and financial costs, to the general lack of ‘need’, a host of different reasons exist for why they aren’t widely used in the business world.

In other words, although business cards are available for all to use, one tends to notice their use only restricted to certain sections of the business community.

Whether customary or a practical decision, metal cards just don’t seem ‘fit’ in with the rest of the business.

On the contrary, you are better off going in for some of the many alternatives that exist, such as paper, plastics, etc.

Some of the industries where this applies are given in the points below.

This aspect of industry is by far the most important consideration when considering a metal business card.

The cost aspect of the cards will tend to make them unviable in certain cases, at least until the amount of sales picks up.

It is understandable, especially when each business card made from metal, often costs as much as several bundles of cards made from paper or plastic.

Another approach that is related to this is that of a profit based one, rather than revenue based one. The difference here is that the ‘viability’ of metal business cards is considered, on the basis of the profits or money left over after deducting incurred expenses.

The exact way in which the revenue is to be calculated will certainly depend on the user, i.e. whether it is to be the amount earned over a period of a few days, weeks or an entire year.

This has to do with the general ‘aura’ of these cards, and sticking to that image.

The general idea of a business card made from metal, is that it is a symbol of quality, repute and high performance.

In this regard, it would be ideal for them to be used for high levels of expertise, or experience, rather than something in general.

Often, the more prestigious your field of expertise and the greater your experience, the more likely it is for metal cards to be used.

The position in the industry refers to the job position that one has, in any given business.

This is more of a company decision than an individual one. Usually, companies offer metal cards to those who are in managerial positions, rather than the same being offered to everyone.

Often a cost-based decision, this is another aspect of issuing metal business cards, which is to be taken into consideration.

A product based approach has to do with the product that a business sells.

Typically, the cost of a product tends to determine whether or not to use a metal card, which once again reflects a cost-based decision.

As a rule, using metal cards would require that the per-unit cost of each unit (of goods or service) being sold be sufficient enough to recover the cost of each metal card. This once again, can be made on the basis of either the revenue or the profits.

This is related to the previous point, albeit focused on the number of units being sold, rather than the per-unit cost.

It is another way in which the usage of metal business cards can be taken into consideration.

In general, the per shipment cost of each sale, should be sufficient to recover the cost of a metal card, and preferably, a whole bundle of metal cards.

Furthermore, it should be added that the term ‘quantity’ itself is rather vague, and can be anything from a few units to thousands of them. This is an important thing that must be defined, before one decides on anything else.

The last is not so much a separate point unto itself, but rather a combination of all of the above.

Given that different situations will require different approaches, it is very likely that the exact one to use will depend on a combination of all of the above factors.

In other words, it is not so much a case of the quantity or quality alone, but rather all of the mentioned approaches, in a combined manner.

As a whole, the above mentioned considerations play a key role in deciding whether to use metal cards or not. There are indeed many more worth looking into as well.

Furthermore, do note that these are at the end of the day, just general guidelines and nothing more. Feel free to spend some time and figure out what works for you. You might just find that your situation is a rather unique, and requires a ‘custom’ approach to the subject.

Regardless, these and others like it should help you go about making sound decisions, and which will pay off in the long run.